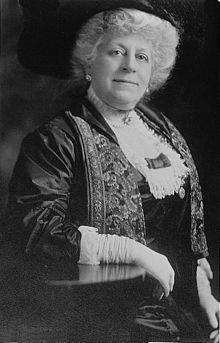 ​ Katharine Pratt Horton was born in 1848, and was the eldest child of Pascal P. and Phoebe Lorenz Pratt.  The Pratt family was one of the earliest families to settle in Buffalo. Her father, a prominent Buffalo, New York businessman, was a partner in Pratt and Letchworth, and also the founder and president of M&T Bank. In 1869, Katharine married John Miller Horton who was also a successful businessman. The couple lived in France for ten years and traveled extensively in Europe.

​Widowed in 1902, Katharine remained active in social and civic organizations of the city and nation. Besides being the regent of the Buffalo Chapter, NSDAR for over 30 years, she was the founder of the Buffalo Federation of Women Clubs. In 1901, she played a prominent part in the Pan American Exposition as a member of the Board of Woman Governors and the chairman of the Ceremonies and Entertainment Committee. In this position,  she entertained President McKinley and was with him and the other dignitaries when he was shot. Among the signatures to be found in her guest book are those of President and Mrs. McKinley and President and Mrs. Theodore Roosevelt.  For over 50 years she was the “grand dame” of Buffalo society. Katharine died in 1931 at the age of 83. She bequeathed her home and its furnishings to her beloved DAR chapter with the stipulation that it be given a new name: Katharine Pratt Horton Buffalo Chapter, NSDAR. During her time in office as regent, her chapter was the largest in New York State and the second largest in the nation. In addition, she was twice nominated for the office of NSDAR President General.

​The Katharine Pratt Horton Buffalo Chapter, NSDAR, vigorously pursues the goals of the National Society: to promote patriotism, historic preservation, and education. Each year we sponsor essay contests about the U.S flag and U.S. citizenship. We promote patriotism by distributing flags to newly-naturalized citizens. We also support conservation, literacy, and the DAR schools for disadvantaged children – all this in addition to maintaining our own ​historic chapter house on Delaware Avenue in Buffalo, New York.

National Society DAR
​
​The content contained herein does not necessarily represent the position of the NSDAR. Hyperlinks to other sites are not the responsibility of the NSDAR, the state organizations, or individual DAR chapters.